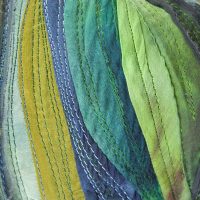 The legend of Melusina is strongly linked to the foundation of my hometown, the city of Luxembourg in 963 AD. In the tale, Sigfried of Luxembourg, Count of the Ardennes, falls in love with Melusina when he hears her singing near the “Bock” cliff (on which the city was build), and asks her to marry him. She agrees but under the condition that she can stay at the “Bock” and that on Saturdays she would be left alone in her chambers. After years of being happily married, he gets suspicious, goes to her room and peeks through the keyhole, revealing her as a Mermaid bathing in her roman bath. He gasps in disgust and horror, and Melusina vanishes into the rocks.

The important part for my interpretation and concept was her moment of breaking out of routines and duties. Six days of the week she is a loving wife and mother until her facade cracks and her predetermined and patronised routine is interrupted. She reveals her true self and lays down her perfectly rehearsed behaviour. Melusina breaks out of her shell and is finally free to do what she likes and let her true self take over the housewife.