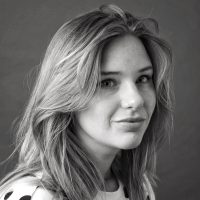 Lucy is a London based costume maker and freelancer originating from South Wales. A recent graduate of Wimbledon College of Arts Costume Interpretation course, Lucy is fastidious in her approach to all aspects of costume. Her time as a student at Wimbledon enabled her to explore a range of disciplines including corsetry, millinery, textile fabrication and dye work; with a flair for pattern cutting and tailoring emerging in the work produced during her final year. As a result of her passion for research and interest in historical costume Lucy was awarded a coveted internship at Cosprop Costumiers. Lucy’s early career began principally as a seamstress in her hometown of Porthcawl, but since beginning her studies she has worked extensively in alterations for television, theatre and film on various productions including SLAUGHTERHOUSE RULEZ (2017), ONCE UPON A TIME IN LONDON (2018) and MATTHEW BOURNE’S CINDERELLA (2018). Most recently Lucy has assisted costume designer Michelle May on a number of high profile commercial campaigns including VODAFONE, KRONENBOURG, ITV’s CORONATION STREET and BRITAIN’S GOT TALENT.

Coronation Street: Then, Now and Forever