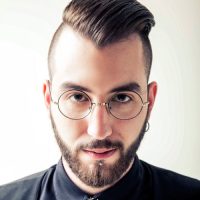 Christos Paraskevopoulos (Christian P.), was born in Thessaloniki/Greece in 1992 and he consists one of the upcoming fashion designers of his generation. During his childhood, his greater source of inspiration was the fairy world of Walt Disney, contributing to the creation of a wide range of interest for fantasy worlds. After he finishes high school, his entrance at the Psychology department of the University of Crete expanded his horizons and gave him the stimulus to analyse in depth broader ideas such as "sin", "fear", "gender","death & rebirth", alongside with social prejudiced themes, such as "church corruption", "oppressed sexuality & fetishism", etc. Moreover, His passion for his Greek origins transformed the designer into a cultural lover with traditional and folklore references. The explosive combination of these worlds consisted in the formation of the designer's identity, which has the motive to break Fashion's conventional norms with a conceptual, artistic and theatrical approach. In 2013 he began his studies at the private institute "Pansik", where he learned the constructive part of the fashion industry (Pattern making-cutting/ Sewing). One year later, he expanded his studies at the private college "I.I.E.K. Delta" at the department of "Fashion Design", where he studied for two years. He has overall took place in 6 fashion shows as a designer, while he was awarded as " The Best Upcoming Fashion Designer" of the year 2014 from his college, for the collection S/S 2014 "AsmodeuS", as a first-year senior in "I.I.E.K. Delta". At the present, he is studying "Fashion Design Technology: Womenswear" at "London College of Fashion", while he undertakes custom made orders as a freelance fashion designer for evening gowns as well as bridal couture. Guarantee for the designer are constituting, the garment's fit, the quality, and the unique design of every singular creation and always in relation to the price of the product.