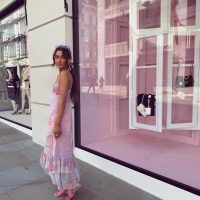 'Why Are We Pretending to Be Outdoorsy?'

((Trend feature for Vogue.com))
((HEADER)) Why Are We Pretending to Be Outdoorsy?

((BODY COPY))
Climber fashion is experiencing a renaissance and designers are mimicking climber-style like it’s going out of fashion, from carabiners ‘clipped’ on the catwalk and gorpcore clad coats on the street: the looks associated with climbing and the great outdoors are officially turning heads. Louis Vuitton leads the way with climbing inspired pieces, with carabiners swinging from necklaces in Kim Jones’s final collection, to chalkbags with a hefty price tag of £1,020. Ralph Lauren too are on the hype plastering retro pieces with the stamp ‘CLIMB’ and ‘ALPINE’. In terms of street parlance, climbing has become ‘Gucci’.

2019 was the year fashion reached peak extreme- 'If You Can Get Killed Doing It, Fashion Wants It', was the headline of a New York Times Style article. Guy Trebay, the newspaper's Culture and Style reporter, begins the article with reference to Alex Honnold's solo of El Capitan and links his thrilling ascent to Louis Vuitton's Chalk Nano bag from their autumn 2019 collection. Louis Vuitton’s flamboyant take on a climbing staple, which can be copped for a measly fiver, received a mixed response from the climbing community- most left confused as to why anyone would want or need a chalkbag for other than climbing- but this certainly was not a one-off. In recent seasons, climbing and mountaineering has begun to permeate into fashion houses wardrobes, for example English label Cottweiler styled their Fall 2018 show with copious carabiners hanging from bags and belts.

With a father whose climbing career began back in the 60s, climber fashion for me is gaffer tape patched down jackets and whatever clothes you already had in the drawers- technical gear just did not exist. As time progressed, the aerobics craze of the '80s led to a Spandex spree, which climbers (including my father) embraced and I have seen many a photo of my father in questionable tights and crazy coloured shorts. Thankfully, tight trousers aren’t bursting back onto the scene- well anyways not yet.

High fashion is now turning to streetwear for inspiration- incorporating styles of performance brands like The North Face and Patagonia. But what is the appeal of having all the gear fit for an expedition to some 9,000-metre peak, but with the intention of wearing it no further than the parameter of Carnaby Street? Streetwear has been the attire of the urban youth since the ‘90s and we have many hip-hop stars to blame for this, for example after RUN-DMC released their song ‘My Adidas’ in ’85 a collaboration was sparked with the brand (Adidas). However, The North Face and Berghaus currently dominate the UK scene with young people wearing technical parkas and fleeces with denim in androgynous combos. This influence of outdoor clothing, particularly climbing and mountaineering, is not something new- British climbers will be aware of the working-class youth who wear these particular brands of outdoor clothing. ‘Chavs’, ‘NEDS’ or whatever society choses to call them, were and remain decked in brands like Berghaus and Helly Hansen with the Berghaus Mera Peak jacket being the most closely associated piece of clothing with working class youth class culture in the UK.

Berghaus has recognised this trend and is heading back to its retro 90s and Newcastle roots with its new Dean Street collection. The collection embodies nostalgic feelings of past eras and it plays on the rave scenes of the 90s, Mancunian Britpop and terrace culture. The collection also incorporates logos and trims from original pieces. Additionally, outdoor brands have constructed collaborations with higher-end streetwear brands like Supreme, which is famous for its sought after, limited product ‘drops’ with certain celebrities and designers. The Supreme X The North Face collaboration is one of Supreme’s most regarded collaborations and the Summit Series jacket from 2007 has become, according to fashion website High Snobiety, “one of, if not the, most popular of Supreme’s regular collaborations.”
As mentioned earlier Ralph Lauren are jumping on the hype but unlike other designer brands who’ve arrived late to the outdoor fashion party, Ralph Lauren's range has mountaineering roots. In 1993, when US climber Ed Viesturs soloed Everest, he was dressed in a red-blue-black suit by guess who? Ralph Lauren! The suit was plastered with the unlikely POLO SPORT logo. This is because Ralph Lauren sponsored Ed Viesturs expedition in return for product testing. Viesturs supposedly stated 'I was the best-dressed climber on Everest, ever,'. The website claims that the collection has “a rugged sense of action and adventure”, summing up the climbing hype: they want the 'look' and they want the apparent adventurous spirit that comes alongside it.