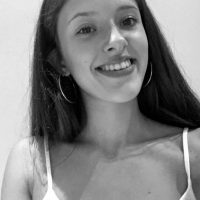 
Henry Holland’s pirate babes walked the plank to the beat of Mike Skinner’s (a.k.a. The Streets) 2002 album “Original Pirate Material”, of which the collection is named after. Holland has transported surf and all things nautical to London streets, pairing skate socks with surf shorts and juxtaposing hippie-dippie flares with Prince of Wales check structured tailoring. Pimped with a youthful edge to take you to the seas (or the streets) in style. Look one, quite literally, set the wavelength, with the signature wavy stripe print feeding across an asymmetric hemline dress conjuring a trippy illusion. The clashing candy colourways of the print screams 60s psychedelia.

Wetsuit-style lines cross a hi-shine shift dress, paired with orange-tinted frames for added edge. Head-to-toe thick, structured denim embroidered with shells, seaweed and starfish contrasts the fluid and light silhouettes of the sundresses that follow. Cut-out slip dresses add an easy-breezy touch of glamour to the collection; casual enough to throw over a bikini yet possessing the elegance to see you through the evening.

Awash with rich textures the collection is extravagant to the touch. Channel your inner Island girl with bold textiles from beaded macramé to devoré velvet and hand-crotchet, garments which work as your fast-track into summer holidays. Slides and socks are a questionable combo yet Holland proved the unlikely embellishment of tinsel injects the extra sass your footwear has been crying out for.

Straying from a stereotypical nautical theme Holland has reimagined it with a young, cool customer in mind, it’s street style inspiration manifests itself in understated athleisure, fanny packs and edgy graphic prints.

House of Holland’s SS18 collection salutes a bold, humorous and playful spirit. Holland’s fun character is echoed in the eclectic theme, energetic designs and of course the wavy stripe print which proves his love for print will live on. A print destined to be mimicked on the high-street in all its rainbow colourways.